An Alphabet Of Fluctuation 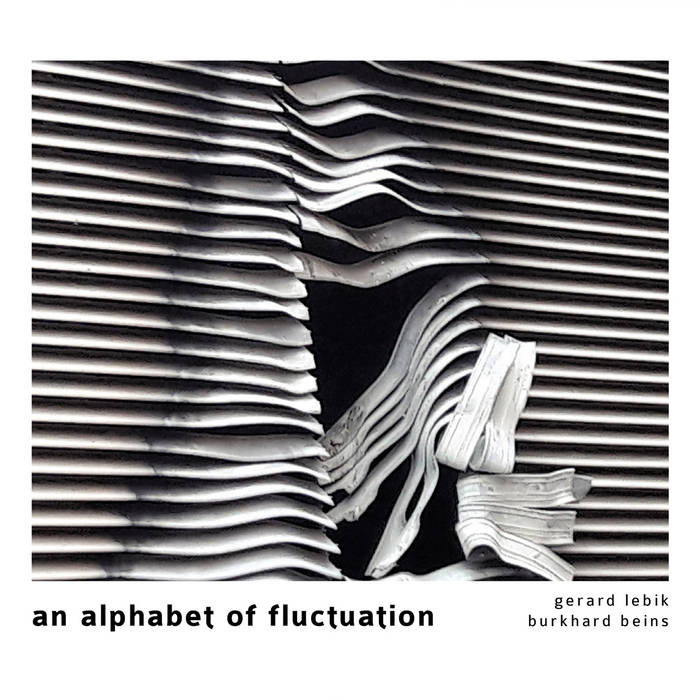 All music by Gerard Lebik & Burkhard Beins
Recorded by Gerard Lebik at Dr. Brehmer’s Sanatorium / In Situ Foundation in Sokolowsko, Poland in August 2020 during the exhibition ‘From Matter To Matter 2019’ by Bożenna Biskupska
Mixed by Burkhard Beins
Sleeve notes by Paweł Szroniak
Cover photo taken by Angharad Davies, outside of Cafe Oto, London in 2017
Graphic design by László Szakács
Produced by László Juhász

Gerard Lebik and Burkhard Beins create musical forms of minimalist idiom, which consist of isolated sound events as well as gradually revealing harmonies and resonances. Metallic sounds from a large heavy cymbal are amplified and blend with electronically generated sine waves of varying amplitude, unfolding in a continuous glissando. An Alphabet Of Fluctuation is the evidence of how both artists rethink their approach towards deep reduction. One can see here a great sensitivity in determining the means of expression and formal concepts.

The artists do not shape the pieces into dynamic structures with a linear course but strive to achieve a specific effect of micro-flickering of sound – an illusion of suspension of time. These recordings should be considered as an environment, involving the listener to intensify perceptual activity. During their realization, an attempt was made to use the natural properties of space in the most nuanced way possible, treating the set of speakers as additional instruments. The experiments with sound directivity and density used here are aimed at creating specific acoustic machinery.

Polish saxophonist, improviser, composer and sound artist Gerard Lebik's (1980) music and radical sound works oscillate between improvised and composed forms. Using acoustic and electronic media, he focuses on such phenomena as time, space, and perception of sound waves. Founder and curator of Sanatorium Of Sound festival and platform for experimental and new music in Sokołowsko, Lebik has collaborated, recorded and performed with Phil Minton, Keith Rowe, Jérôme Noetinger, David Maranha, Lucio Capece and Ryoko Akama among many others. / gerardlebik.net

Born in Lower Saxony, German composer, performer and percussionist Burkhard Beins (1964) has been living and working in Berlin since 1995. As a prominent figure of contemporary experimental music, he is known for his definitive use of percussion in combination with selected sound objects. In addition, he works with live-electronics and analog synthesizers, and has conceived several sound installations. Alongside his solo and collaborative works, he is a constant member of ensembles such as Polwechsel, The Sealed Knot, Activity Center or Perlonex. / burkhardbeins.de