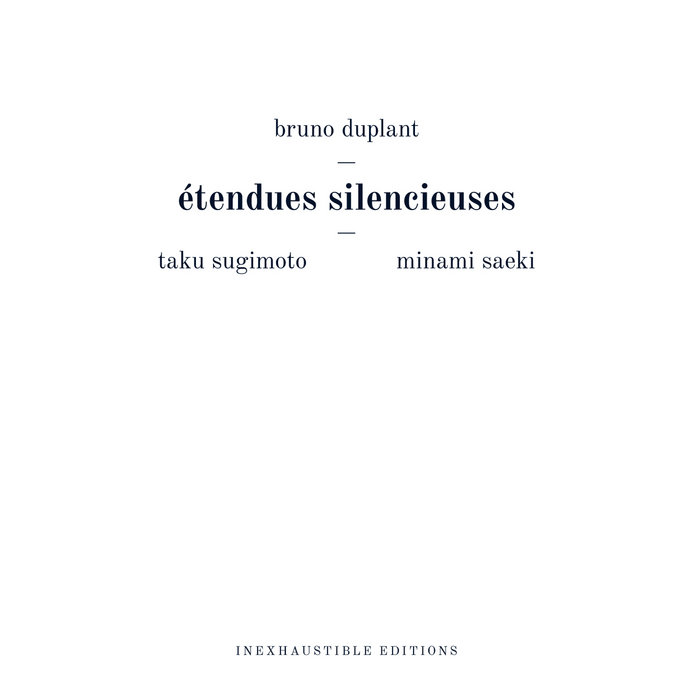 Physical copies housed in stylish 6-panel digipack with transparent tray are available to order from 1 September, 2019

For prolific composer, improviser and multi-instrumentalist Bruno Duplant (1968) composing, improvising and playing music is similar to imagining, creating, and sometimes decomposing new spaces/realities, and new entities. But it is also a reflection on memory, not the historic one, but memories of things, spaces, and moments. Among others he has collaborated with Paulo Chagas, Lee Noyes, Delphine Dora, Ryoko Akama and Dominic Lash; and has also made solo works for labels such as Another Timbre, Aussenraum, B-Boim, Diafani, or his own one curated with Pedro Chambel, Rhizome.s.

Japanese guitarist Taku Sugimoto (1965) initially gained attention in the late nineties for his restrained, melodic playing, unusual in the world of free improvisation. Later his music became increasingly abstract, all but eliminating melody and featuring extended periods of silence. He has collaborated with other Japanese musicians involved in the Onkyo movement, such as Otomo Yoshihide, Toshimaru Nakamura or Sachiko M; and with musicians from European free improvisation scenes – notably trombonist Radu Malfatti and guitarist Keith Rowe. / japanimprov.com/tsugimoto

Movie actress, dancer and singer Minami Saeki (1990) studied classical ballet, contemporary dance and classical singing, and has acted in films such as Village On The Village (by Yukinori Kurokawa in 2016) or Natsu No Musumetachi: Himegoto (by Teiichi Hori in 2017) – among many others. Recently she is mostly active as a singer and composer who has worked with Taku Sugimoto, Manfred Werder, Stefan Thut, Junichiro Tanaka, Wakana Ikeda, Masafumi Ezaki and Takashi Masubuchi – only to name a few. Her album entitled Songs is a collaborative work with legendary guitarist Taku Sugimoto.

Inexhaustible Editions is a tiny bedroom label for acoustic and/or electronic improvisation, modern compostion and other strange and beautiful sounds we’d love to see released.

Guests include Kassa Overall and Muriel Grossman, plus an LP of the week by Van Hunt.