To The Memory Of 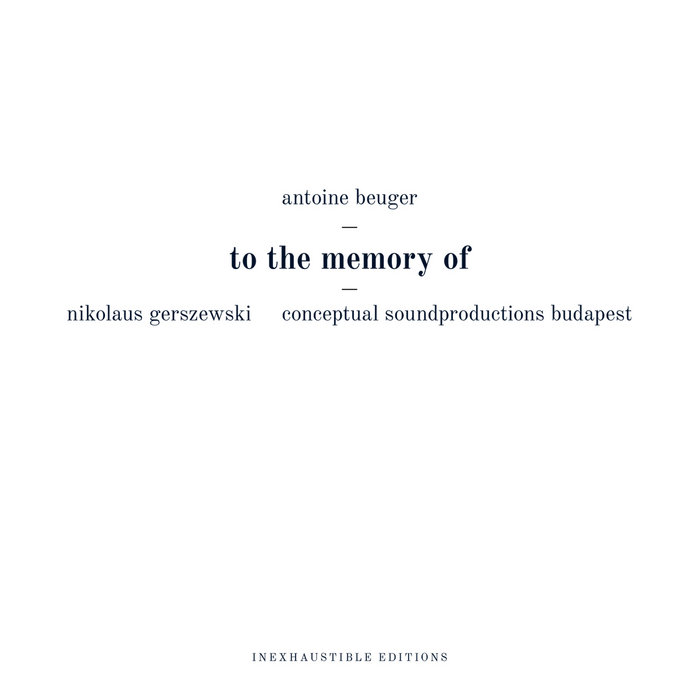 Physical copies housed in stylish 6-panel digipack with transparent tray are available to order from 1 December, 2017

a group of people forgathers
together they engender a space for individual sounds or words to appear
a space, not least, for themselves to appear to one another
an unconditional space of conﬁdence and mutual recognition
a pure “space of appearance” (Hanna Arendt)

is this possible?
is it possible to withstand the lure of being more organized, more well-deﬁned,
more in control of what “we” are,
of what it is, that we are doing?
more determined about who or what belongs to “us” or what we are doing
and who or what doesn’t?

Dutch minimalist composer Antoine Beuger (1955) studied with Ton de Leeuw at Sweelinck Conservatorium in Amsterdam in the mid-seventies. In 1990 he began composing after an interruption of about a decade, and two years later he founded Edition Wandelweiser together with composer Burkhard Schlothauer. His compositions have been interpreted by Konzert Minimal, Ensemble Dedalus, Jürg Frey, Radu Malfatti, Greg Stuart and Cristián Alvear – among others. Since 1996 he has been artistic director of Edition Wandelweiser Records. / wandelweiser.de/antoine-beuger.html

Budapest-based German composer, theoretician and fine artist Nikolaus Gerszewski (1964) works with diagram notation and graphic scores in his compositions. Since 2008, his music has been regularly performed in Europe and the United States – his work, which he calls Ordinary Music, constantly focuses on the issue of an open result composition. In 2014, he founded Conceptual Soundproductions Budapest at Hungarian University Of Fine Arts, with the objective of combining conceptual thinking, as is common in contemporary visual arts, with an experimental music practice. / ordinary-art.com

Hungarian collective Conceptual Soundproductions Budapest was founded by German composer and theoretician Nikolaus Gerszewski at the Hungarian University Of Fine Arts in 2014. The group with its ever-changing line-up concentrates on experimental and conceptual music starting with and after Cage, including the classic avantgarde – Cardew, Wolff, Riley etc. – as well as the manifestation of experimental traditions in contemporary music – e.g. artists in and around the Wandelweiser collective –, and the compositions by members of CSB.