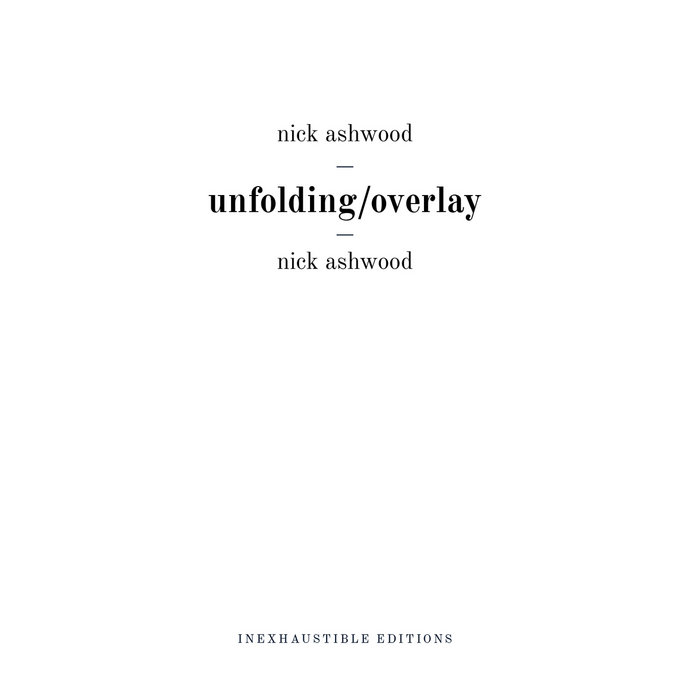 Physical copies housed in stylish 6-panel digipack with transparent tray are available to order from 1 October, 2020

Mesmeric displacements, chordal transmutations, long tones, latent tonalities, austere, immersive, realigning the senses, clear yet unstable, ephemeral yet tangible. Listening to Nick Ashwood’s unfolding/overlay for the first time, I am struck by its restraint, its elegance, and the complexity that evolves from the most simple of elements and approaches: the tonalities generated by two, bowed, acoustic guitars.

This performance of the composition has been created ‘live to tape’ in two continuous, unedited recordings that unfold and overlay in relation to each other in real (recorded) time. This process is palpable in the listening experience, engendering an organic intimacy and vulnerability as the work develops. Using just intonation and a capo, Ashwood’s tones splinter, multiply, abstract and coalesce into a wash of colour exchanges. As the piece progresses, these washes continuously evolve into new fields of harmonicity, forming paradoxical points that unfold vertically and horizontally in space and time.

Ashwood usually works within extended guitar technique traditions (as developed by Keith Rowe and others since the 1960s). However, in unfolding/overlay, he has chosen to utilise bowing techniques to explore immersive fields which can be generated from minimal resources.

Enfolded in the shifting tones, our ears are at the edge of themselves. As I listen to the work again, and again, I hear it differently each time: new intricacies and multiplicities that I hadn’t fully absorbed emerge. The piece, itself, seems to expand one’s experience of the moment as an unstable and ultimately unknowable interplay.

Nick Ashwood (1990) is an Australian guitarist from Hobart, Tasmania, now residing in Sydney. He works with improvised and composed experimental music, and focuses have been on the possibilities of the steel-string acoustic guitar by means of preparations, just intonation and bowing. He has toured throughout Australia and New Zealand, member of the Splinter Orchestra, and has collaborated with artists such as Laura Altman, Amanda Stewart, Jim Denley, Robbie Avenaim, Annette Krebs, Isabelle Duthoit, Franz Hautzinger and Johnny Chang. / nickashwood.wordpress.com