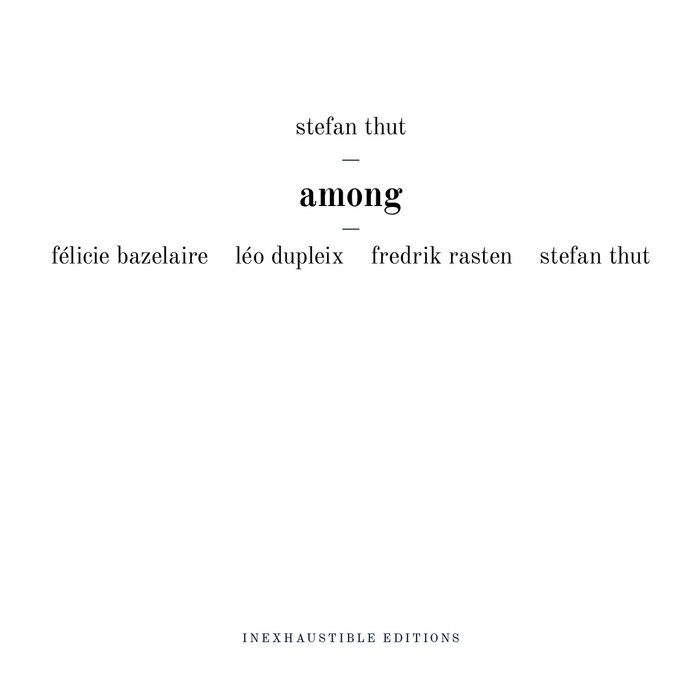 Physical copies housed in stylish 6-panel digipack with transparent tray are available to order from 1 October, 2020

a practice of noticing among others

The piece among is scored for three string players and sine waves which a fourth performer is responsible for. Aside of the usual purposes the three string instruments – in the present version a double bass, an acoustic guitar and a cello – also serve as resonating bodies for loudspeakers: the sine waves are sounding by means of transducers attached to the three wooden boxes. The instrumentalists attune initially to their respective sine wave, and then continue in ratios of imaginary odd-numbered partials up to the 17th. However, the frequencies of the three sine waves are multiples of either prime triplets or other prime numbers like for instance on page one – 23, 29 and 37. This kind of harmonic space is more obfuscating the process of tuning than making things harmonically comprehensible as a whole. In fact, to begin with the performer of sine waves, the acoustic conductor, divides the three instrumentalists into three individuals. They can only act in self-reliance to their own tone and with confidence to the others. Because of the very high order of the intervals occuring between the three, they mostly remain indefinable regarding specific tunings and open up a territory of the unknown. Still for me, the evolving harmonies appear as “just” due to the thoughtfulness and dignity of the ensemble. Here it is not a matter of tuning to each other (as it is the case in a majority of music practices) but noticing among each other in playing some tones: an actual model for a co-existence.

Swiss composer and cellist Stefan Thut (1968) is interested in processes and scores that invite both performers and listeners to delve into a world. Through his compositions he provides relatively determined systems in order to develop a praxis. In addition to instruments applied in traditional ways, he also uses everyday materials as components in his work. As an interpreter he has been performing music by his fellow and affiliated composers of Edition Wandelweiser. He studied music at the Lucerne Conservatory and at Boston University School of Music. / stefan-thut.blogspot.com

Félicie Bazelaire (1986) is a double bass and cello player based in Paris. She shares her time between concerts and performances, studying pedagogy through her master's degree at the Paris Conservatory, and teaching at the Orsay And Auxerre's Conservatory. She is mostly interested in classical chamber music, and contemporary music with her various solo projects, with Ensemble Hodos and with the French large orchestra ONCEIM, led by Frédéric Blondy. She investigates the relationship between musicians, composers, improvisers and the actual music. / sites.google.com/site/feliciebazelaire

Paris-born composer and improviser Léo Dupleix (1988) initially studied piano, but switched his focus to experimental and improvised music. In performance, he uses a variety of sonic elements including motor-produced vibrations, sine tones, white noises, feedbacks and field recordings. He previously lived in Tokyo for an extended period and has worked with a number of Japanese improvisers. In recent years, Dupleix has also been active as a composer: in 2018 he wrote the commissioned piece Melodies, Harmonies, Iterations for Suidobashi Chamber Ensemble.

Norwegian guitarist, improviser and composer Fredrik Rasten (1988) is based in Oslo and Berlin. Mainly focusing on the musical possibilities within just intonation and related sound phenomena, and in his work he is reaching for an actively listening state wherein to intuitively explore the complexities of tone and harmony. As a performer he is mainly playing acoustic guitar, using real time retuning of the instrument, vocal shadings and different preparations to create warm and fluctuating resonances. His active bands include Oker, Pip, Volumes and Arches. / fredrikrasten.com